On the occasion of Megyn Kelly’s firing from NBC. 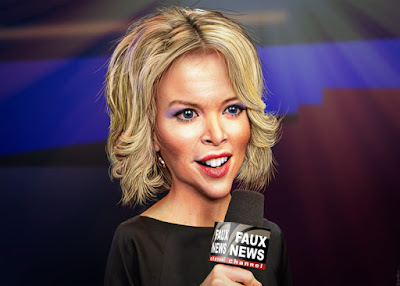 As long as she was singing the politically correct #MeToo tune, she was good enough to land a job with NBC. Even more so if she was – suddenly, after many years of conformity – perceived as a dissident within Fox News.

I find Megyn Kelly to be as phony as any TV star, and the entire TV (sub)culture perverse, especially in the US. Dozens of millions of dollars per year for being a TV blabberhead? (And I don’t mean Kelly specifically – any overpaid TV star.) Come on! TV as a medium is grossly overestimated, but I suspect that won’t last too long as the present, older generations of TV addicts gradually pass away. YouTube and generally the Internet is where it’s at nowadays. “On demand” is “in” – while being fed what TV executives assume you’re interested in is “out”.

On the other hand, in the same degree that the TV culture is phony and perverse, the politically correct atmosphere in the US is laughable. Firing people from their jobs because of their opinions on Halloween costumes? Even Bolsheviks used to invent better excuses for getting rid of “uncomfortable voices”.

A couple of excellent comments by New York Times readers are quoted below. The second of them even earned the badge of a “NY Times pick” – all the more surprising given that the New York Times, too, have been stoking the politically correct fire.

As to CNN, it’s hopeless. I listen to Brian Stelter’s media podcast sometimes, but it was surprising to see Stelter practically celebrating Kelly’s firing – without much noticeable reservation, seemingly without giving a second thought to the issue of freedom of expression.

The tenor of CNN’s reporting seemed to be: “She wasn’t bringing in enough dollars for NBC anyway, so why not finally use political correctness as an excuse to get rid of Kelly? Political correctness is ultimately what got her the job in the first place – so why not take it away from her again, using the same tool?” In other words, the end justifies the means – and if we sacrifice freedom of expression in the process, we’ll just shrug it off.

It’s as if the financial bottom line was the most sacred value Americans can think of, and when it comes to that, freedom of expression must step aside. In my naïveté, I’ve always assumed (or hoped) that America valued the latter more.

And yes, as the first New York Times reader says, the result of the malaise of political correctness is that a madman like Trump gets elected into the highest office:

This is actually why Trump got elected. Not because of latent racism, but because people are terrified that if they say the wrong thing it will destroy their careers. Precisely the wrong decision. If this can’t be made a teachable moment, nothing can. This only feeds the backlash.

This strikes me as an unfortunate act of censorship that harms our ability to talk about things like race and makes it harder to achieve MLK’s dream - where a person is judged not by the color of their skin, but by the content of their character.

Ms. Kelly tried to make the point that wearing a different skin color for a Halloween costume is not necessarily racist.  She did so in a clumsy way, but this a reasonable, perhaps even obvious point to make.

Rather than shutting down this kind of conversation and demanding the head of the person who dared offer such a prospective, a more productive response would be to say things like

... wearing blackface is hurtful to many people because of its historical use and horrific history of inhumanity

... as a matter of courtesy and human decency, people should refrain from doing it

... that people should not be vilified as racist for dressing in a costume that includes a skin color other than their own, but rather it is something to talk about to improve tolerance and understanding

... if your kid is putting on blackface, talk to your kid about the context and implications

The hysteria, the default to the worst possible interpretation of intentions, and the shutting down of conversation on this kind of thing is harmful and counterproductive.

Yup, the “default to the worst possible interpretation of other people’s words/actions/intentions” is the rotten core of political correctness.